I've updated my website to include show photos from Jesus Christ Superstar at Moorhead High Theatre and Red at Theatre B.  Click on the images below for more!


Posted by Jordan Green at 3:10 PM No comments:

When the design concept started to center around arena rock there were a few things ideas that immediately popped into mind.  I wanted tight beams of light, haze, and the intense white light that the HMI fixtures typical of rock tours put out.  The photo above (taken by Robby Njos for our billboard advertisement) shows all of this in one shot.

To accomplish this we use four sets of ACLs (short for Air Craft Landing lights), and 24 moving lights with the color set to 5200 Kelvin, four HMI followspots, and conventional sidelight gelled with color correction gel to mimic that color.

The ACLs use sealed beam lamps which produce a 5 degree beam angle.  They are in sets of four near the top of the photo.  The Robe Robbin 100 LED Beam is a close second when it comes to narrow beams.  Its 7 degree beam angle looks to be almost parallel in haze (see photo below, also from Robby Njos). 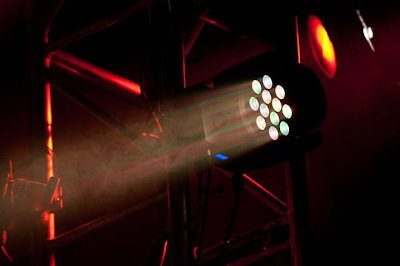 P.S. Get your tickets now at www.MoorheadTheatre.com

Posted by Jordan Green at 2:58 PM No comments:

For Moorhead High School's production of Jesus Christ Superstar the production team has come up with a concept of Grunge Rock meets Corporate Rock.  To this end, I wanted to create some of the dynamic moving light effects which are popular in modern arena rock shows.  To do this we are going to use, among other lights, 20 Robe ROBIN 100 LED Beam moving heads.  The promotional video below should be a good indication as to why they were chosen:

They are fast, bright, and have the narrow beam that looks great in haze.
Posted by Jordan Green at 6:23 PM No comments: